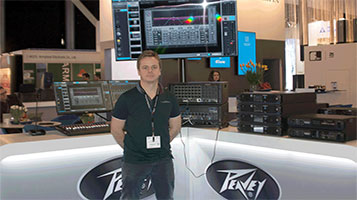 Leading live sound engineer, Ash Hannis, will be running a series of live demos on the Crest Audio® Tactus™ digital mixing system on the Peavey Commercial Audio® booth 7-M210 at ISE 2018. Well known for his stints with Nizlopi and Kasabian as well as regular FOH engineering responsibilities on some of the biggest stages on the festival circuit (Summer Sonic Festival, 02 Wireless, Glastonbury and more), Hannis is currently using Tactus on tour with Showaddywaddy. Demos will be taking place on the stand every day at 11am, 1pm and 3pm.

Built in partnership with Waves, the comprehensive Tactus modular mixing system combines front-of-house and stage input/output boxes with a compact control console and state-of-the-art software options. A simple, customisable touch-screen operating interface puts all of the audio routing, processing and mixing tools within easy and immediate reach and the integration of the Waves eMotion™ LV1 mixer application offers an unprecedented level of control. The result is a powerful and flexible mixing system, capable of delivering studio-grade sound quality at any type of live event. Tactus’s modular approach provides unprecedented scalability for any size event across a wide range of applications including touring, corporate events, houses of worship, performing arts venues and live music.

According to Hannis, Tactus is a real revolution in live mixing: “The best thing about the Tactus system is its complete flexibility and scalability,” he said. “I can take out just one screen for smaller shows or two or more for a larger show – with or without the control surface. Set up and strip down time is very fast; I’ve usually got front of house dropped and rolling away before the back-line tech has put the first guitar in its case. I’m really looking forward to showing it off at ISE.”

Hannis will be accompanied by Noam Raz, Waves marketing manager, for the 3pm demos on Wednesday 7th Feb and Thursday 8th Feb.