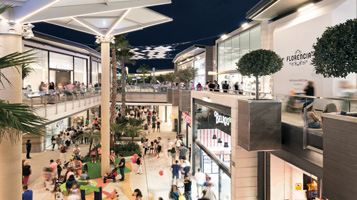 Mallorca, situated near to Palma Airport, is a huge, multi-zone retail mall requiring the best proven audio quality management available. With a total investment of around 190 million euros, the venture saw 2,400 people involved in the construction of the centre, which has a host of flagship stores ranging from Primark to Media Markt, Cortefiel, Pedro del Hierro, Women’secret, Decathlon, H&M, Mango, C&A and a number of Majorcan clothing designers and footwear manufacturers. Dolores Bañon, the director of promotion and development for Carrefour Property España, sums up the size of the project. “The Balearics will never have seen so many top brands under the same roof,” she said. Covering more than 70,000 square meters, a distributed system had to be implemented. The multi-zoned areas often require separate source material. So, each bathroom (men, women and children), the restaurants, retail outlets and walkway areas all required a dynamic audio feed with a constant variation of playlists depending on climate and affluence within the building. This meant that the audio DSP system had to communicate with other subsystems, namely a digital meteo station and Pax counter camera system. Reliable and trusted solutions were absolutely vital as installers faced an incredibly tight time frame – the entire audio install needing to be completed in just 10 weeks. 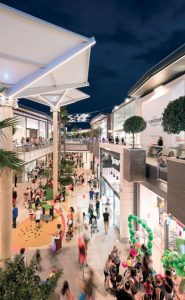 To meet the challenge of outstanding audio and control throughout the Mall, Spanish specialist distributor Neotecnica came on board to oversee all aspects of the technical installation. The reliability and proven track record of Peavey’s MediaMatrix NION processors made them the preferred choice, with an optical CobraNet fibre network distributing the sound throughout the separate areas of the mall via a Cisco-based network with over 2km of fibre and copper cable runs. Two NION n6 processors manage the core audio for more than 55 different zones: all audio channels are processed and transmitted from the NIONs to a total of 13 Crest Audio Ci amplifiers via CobraNet . In addition to the Ci amplifiers there are two nWall CobraNet I/O panels located in the mall for patching two channels in and two channels out of the MediaMatrix system. This is useful for events and ad hoc performances within the mall throughout the calendar year. As well as handling all audio aspects of the system, the NIONs are also at the heart of control, utilising GPIO interaction with the meteo station and counter camera systems in order to schedule and steer the correct audio sources at any given time dependant on weather, mood and overall business, all thanks to the diverse MediaMatrix control toolbox. MediaMatrix Kiosk (PC) and Kiosk2Go (Tablet Device – HTML5) GUIs have been created and deployed within NWare and hosted by the NION processors, providing staff with the means to take control, monitor and maintain the system within an intuitively designed environment. The 13 Crest Audio Ci 30×4 and 20×8 amplifiers are installed and distributed across nine racks throughout the centre utilising a total of 12km of speaker cable. For crystal clear audio, Fohhn speakers were installed throughout with Focal in-ceiling speakers. In total 266speakers were used, distributed in 70/100V lines, with LOW Z subwoofers and LOW Z column systems.

Each area of the mall now has its own playlists that change automatically, depending on the surrounding situations, which means visitors are able to enjoy a vast range of retail therapy, and there is sure to be something for everyone throughout the 120 stores to be found within the Mall. Fan Mallorca Shopping Mall now ranks as Spain’s premier shopping experience, with an audio system that is fitting for such surroundings. James Kennedy, operations manager at Peavey Commercial Audio remarked “We are once again delighted to work with our Spanish partners, Neotecnica, in making this project such a success. 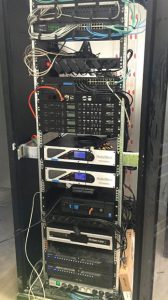 Applications like these always throw up technical curve balls and this was no exception! The third party systems integration with NION for dynamic content delivery was particularly challenging for the engineers, but they have managed to leverage the power of NION to overcome these problems through the flexibility and capability of python scripting and bespoke control devices within NWare. The guys at Neotecnica have done a sterling job!”

Engineer Fernando Vidal Wagner from Neotecnica said: “The open philosophy of NWare makes it possible to adapt it dynamically, which is in my opinion, one of the key points of this project.” Carrefour Property, Owners of Fan Mallorca Shopping Mall, were thrilled with the outcome. “We are delighted the project has been completed in record time,” said a spokesman. “We wanted to develop a different project, a shopping mall music experience oriented to include many different areas. Audio control allows each area their own playlists which change according to the weather or the influx of people. This project is a real turning point for the retail sector, and marks a milestone in the history of shopping centres.” 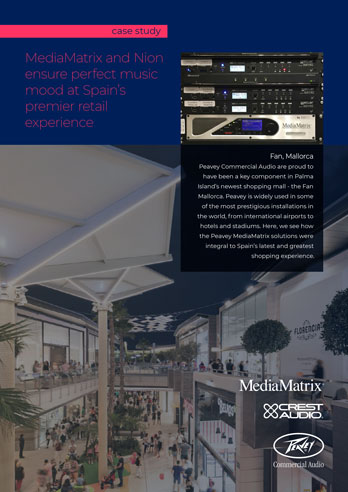