Crest Audio®, a division of Peavey Commercial Audio®, will be showcasing its latest Tactus™ digital mixing system at ISE 2017, along with a new dedicated Tactus microsite.

The Tactus system consists of both hardware and software components incorporating the Waves eMotion LV1 software – fast becoming an industry standard for professional audio mixing processing and control. The Waves eMotion LV1 mixer application runs on a Windows® PC or Mac® with one, two or three multi-touch screens.

Utilising Waves Soundgrid audio network protocol, the Crest Audio Tactus systems comprises of three hardware units, the Tactus.FOH, Tactus.Stage and Tactus.Control, with each addressing the input and output, monitoring and control plus synchronisation requirements of audio signals at the stage and front of house points.

James Kennedy, operations manager for Peavey Commecial Audio EMEA said: “We have spent time listening to our customers and have worked with them to develop what we believe to be the ultimate in modular digital mixing. The latest version that we’ll have on show at ISE boasts revised faders and slider control on the Tactus.Control as well as an improved dedicated master on/off switch.”

The Tactus Digital Mixing System redefines mixing by providing a simple, customisable touch-screen operating interface that puts all of the audio routing, processing and mixing tools within easy and immediate reach. Designed to work with the new Waves eMotion™ LV1 Mixer for SoundGrid®, the Tactus Digital Mixing System is one of the most innovative and feature-rich digital audio mixing platforms ever devised. In addition to providing a full complement of professional features, the Tactus system allows the use of Waves audio processing plug-ins for live events.

The Tactus hardware is comprised of the Tactus.FOH™, the audio processing core for the system, and the Tactus.Stage™, a 32-in/16-out remote stage box. The modular capability of the Tactus Digital Mixing System, which interconnects via standard Gigabit Ethernet cabling and an internal Gigabit switch, allows multiple configurations in a range of channel counts to best suit each application.

The Tactus.FOH is powered by the Waves SoundGrid audio processing/networking platform, ensuring extremely low latency with precision audio processing. When combined with the new Waves eMotion LV1 Mixer for SoundGrid, the products result in a mixing platform that is unsurpassed in the industry with regard to features, audio quality, and flexibility. The Tactus.FOH frame provides 8 local microphone/line inputs and 8 line outputs in addition to 2 AES outputs and serves as the audio signal processing engine.

Tactus.Control is a tactile motorised fader board complimenting the eMotion LV1 touch screen by providing moving faders, lighted buttons and knobs for the most commonly used functions. It has 16 Channel & 2 Master motorized faders, with Mute, Cue and Select buttons along with a multi line scribble strip display. These can follow screen layer selections or be locked on a layer for expanded control.

The Waves eMotion LV1 mixer application runs on a Windows® PC or Mac® with one, two or three multi-touch screens. One or two Tactus hardware surfaces with moving faders can be added for tactile control if desired connected via USB to a PC running the eMotion LV1 software and connected to the Waves SoundGrid network the Tactus.Control allows tactile feedback to the sound engineer as typically required for live performances without having to look down at a touch screen. Multiple Tactus.Control panels can be used to create a high quality, flexible live sound mixing system.

James Kennedy adds: “Working closely with Waves, Tactus offers a professional sound mixing platform that is fitting for today’s digital demands, with features that will benefit all users, from the workplace to a live music venue. We’ve made connectivity and networking simple, with USB, Ethernet and MIDI all available. What’s more, Tactus is flexible to your application needs, with In/Out components, processing, touch screens and controllers all being catered for to allow easy set-up customization. Above all, of course, users benefit from the trusted Crest reputation and the sound quality that comes from being part of the Peavey Commercial Audio family.”

Discover more about Tactus on the new microsite www.tactusdigitalmixing.com – due to launch a few days prior to ISE’s opening on February 6th 2018. 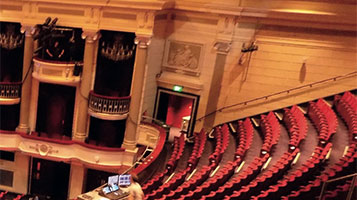 Birmingham Hippodrome is one of the largest touring theatres in the UK. MediaMatrix from Peavey is widely used in some of the most prestigious corporate and leisure installations in the world, including Heathrow Airport, Wembley Stadium, Ascot Racecourse and the Bellagio Hotel in Las Vegas, with Birmingham Hippodrome being a recent addition to the long list of venues benefi ting from the industry’s leading pro-audio matrix solution. 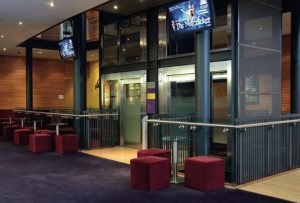 THE CHALLENGE
Following an extensive £34m development at the turn of the millennium, Birmingham Hippodrome now ranks as one the fi nest theatre complexes in the world, with a 1,847-seat auditorium, eight hospitality and conference rooms, an additional 206-seat studio theatre, 120-cover restaurant, large new front of house areas, spacious foyers, a deli-bar and off-site bar and restaurant.
It is the largest independent theatre outside of London and regularly welcomes audiences of 500,000 each year – the highest attendance fi gures of any single theatre in the UK.
To further enhance the theatre experience, investment was made to give Birmingham Hippodrome a state-of-the-art audio management system. The aim was to provide the numerous areas of the theatre with fl exible audio control, allowing staff to conveniently manage volume levels and content, as well as
provide versatility to rooms that may need dedicated audio facilities for presentations or private hire. 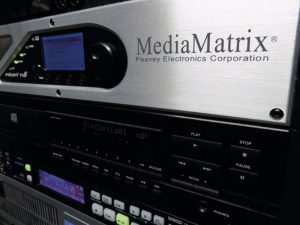 THE SOLUTION
To meet the demand for fl exibility and total control, Birmingham Hippodrome opted for the proven combination of Peavey’s Media Matrix solution, coupled with AMX hardware, with end user operation available from either an Android device, fi xed wall points, or AMX wallmounted touchscreens.
The project was managed by Birmingham Hippodrome and installed by highly experienced audio visual integrators, InspiretechLtd. Via a secure login, Birmingham Hippodrome’s technical team can also access the system remotely, meaning any issues can be conveniently dealt with wherever they are.
With a MediaMatrix Nion N6 unit providing the brains for the venue’s audio, the solution allows for a centralised source for audio throughout four main zones in the theatre, with ability for content and level confi guration. Using CAB-4n units, all end-points can be set up in groups of four channels for microphone or line level in any of the available confi gurations. This, in turn, provides total versatility for bringing professional audio to any of the venue’s numerous hospitality and conference rooms. Inspiretech Ltd managing director, Andy Wilmott, says: “For the technical team, each end-point is, effectively, like having a full mixing desk at your fi ngertips. But for front of house operators, they just need to know that when they press a volume button, it functions correctly.”
He added: “I have been installing MediaMatrix into venues ranging from shopping centres to football stadiums for over ten years. I have also installed MediaMatrix on cruise ships, which can be a pretty harsh environment, and it just runs and runs. The integration with systems such as AMX works really well. For reliability and integration, MediaMatrix is top of the tree.” 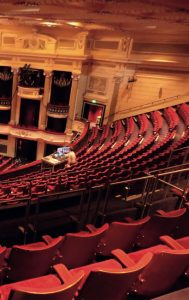 THE RESULT
Birmingham Hippodrome can now boast the most cutting edge audio visual solution of any theatre in the country. As well as providing key areas such as the restaurant and foyers with end user control via a tablet device, the system also provides the Hippodrome’s technical team with total audio control at any one of up to 28 end-points.
Andy Willmott explains: “The restaurant manager, for example, will have management of his volume levels, but the system can be told to control levels and content in that area if required; for example, if there was an event taking place adjacent to the restaurant. The process is quick, reliable and hassle free.”
With such a user-friendly interface, staff at the venue have taken quickly to the new technology. Using Peavey’s award-winning Kiosk2Go software, and leveraging the power of HTML5, any control interface that a designer creates using the MediaMatrix can be accessed wirelessly with any Android, iOS (Apple), Blackberry, Windows or Linux mobile device. Paul Keogh, technical coordinator at Birmingham Hippodrome, says: “Such are the benefi ts that the system brings to user operation and system management that we are now being asked to consult at other theatres on their installations.” 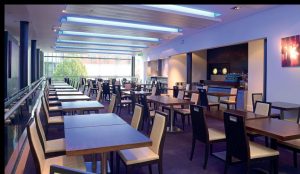 Mark Coombes, European sales manager for Peavey, said: “We are delighted to see, and hear, MediaMatrix in one of the fi nest theatres in the world. The quality of the installation from Inspiretech Ltd is fantastic and we are proud to add Birmingham Hippodrome to our long list of prestige venues around the globe enjoying Peavey commercial audio.” 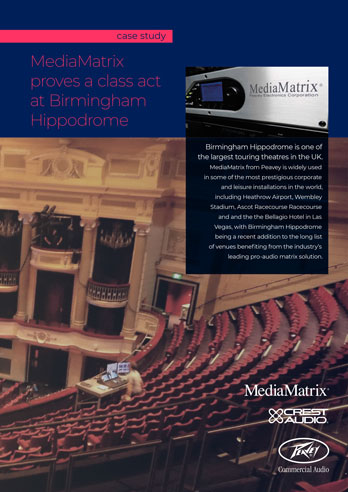 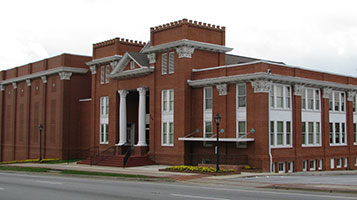 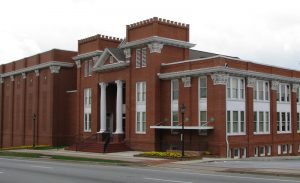 The Aurora Theater is known for bringing Broadway to Main Street in the Northeast Atlanta suburb of Lawrenceville, with repertory including the classics “A Chorus Line” and “Annie Get Your Gun,” and seasonal favorites like Charles Dickens’s “A Christmas Carol.” When the lights go up, a Peavey Commercial audio system helps the company deliver world-class productions every night.

Housed in a modern performance theater designed as a wide, shallow room with high ceilings and balcony, the Aurora Theater is a prime use of the Versarray™ ribbon-loaded line array. Twin hangs of six Versarray 112 enclosures and one Versarray 218 subwoofer each flank the stage, providing 90 degree horizontal and 15 degree vertical coverage per cabinet. The line arrays are able to cover the substantial horizontal distance as well as target the upper seating area with articulate, ribbon-driven sound reproduction. 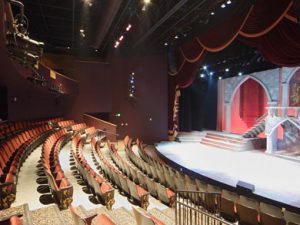 MediaMatrix® NION® n3 digital signal processors serve as the brains of the audio system. The NION units provide management and control for the Versarray, including essential functions such as crossover and equalization, as well as assigning delay characteristics and tailoring the response of system components to the room. A Crest Audio® HP™ Series mixing console handles a mix of microphone inputs and auxiliary audio sources – such as high-quality sound effects – that are stored on hard drives and other external devices.

Six Peavey® GPS® 3500 amplifiers provide power to the left mid, left sub, right mid and right sub area of the Versarray line array system, while three Peavey GPS 1500 power amplifiers are assigned to the high frequencies. In addition, a trio of Peavey Sanctuary Series® SA-4200™ power amps with built-in Auto Delay technology help set the proper delay time for the balcony fills, and deliver audio to public areas such as lavatories and stairways. The theater also uses a pair of Peavey PR® 15 enclosures as stage fills and a 16FX™ mixer in a rehearsal room.