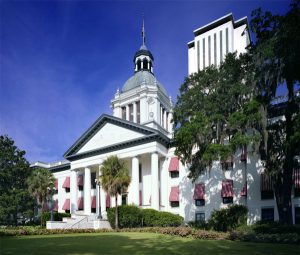 When the gavel sounds in the Florida House of Representatives, a MediaMatrix® NION® audio system is ready to help the on-site techs manage the session’s demanding schedule through atouch-screen interface developed in NWare™ Kiosk software.Four NION n6 digital signal processors and sixteen CAB™ 8i audio bridges control and distributeaudio for the chamber’s 128 member microphones and the Speaker of the House – as well assome AV components – through a 140 input by 16 output configuration.

NWare Kiosk, a version of the free MediaMatrix software for NION Series products, allows installers to configure custom control interfaces for specific projects and then send them to laptops, iOS devices, or in this case, a 40 inch touch screen. With this in-depth interface, the on-site techs at the Florida House of Representatives can control every facet of the audio system on the fly, from turning microphones on and off to making level adjustments, all at a moment’s notice.

“When the Speaker of the House recognizes a Representative, the audio guys have maybe one second to turn on that person’s microphone,” said system designer and installer Les Stephenson of MusicMasters in Tallahassee. “It’s a very demanding environment.” 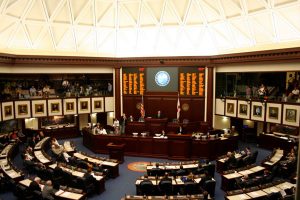 The interface designed in NWare Kiosk also makes it easy to track a meeting or session. A tech can search alphabetically for a representative’s name or simply touch the corresponding icon on the screen to turn on or shut off that person’s microphone. Stephenson built the graphic interface to allow system administrators to enter new names and makes changes as needed, as well as handle other scenarios such as meetings that are run by numbers – one for each of the 128 seats.

The multi-speaker system is also configured in the NION environment, including zone assignment, time alignment, crossover, EQ and more. The ability of the system to interface with the chamber’s existing relays and TTL infrastructure was another important consideration in the project.